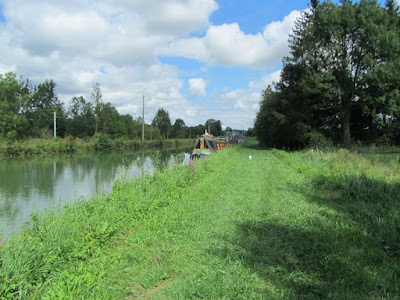 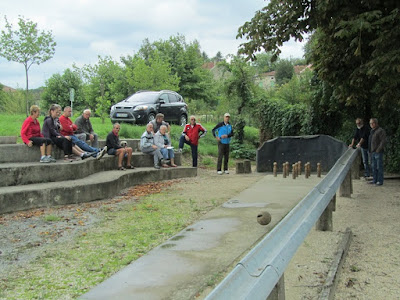 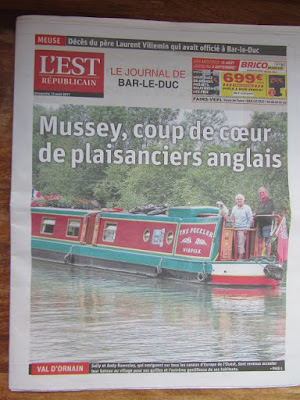 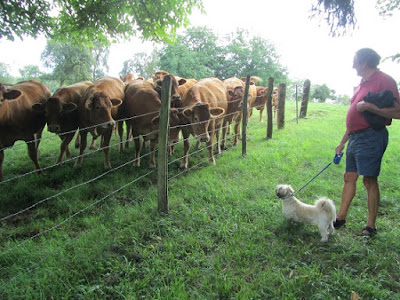 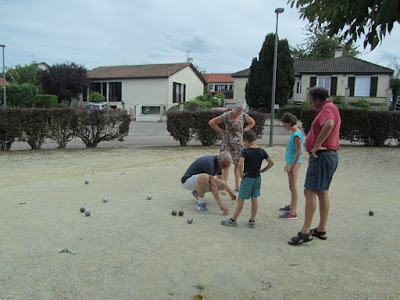 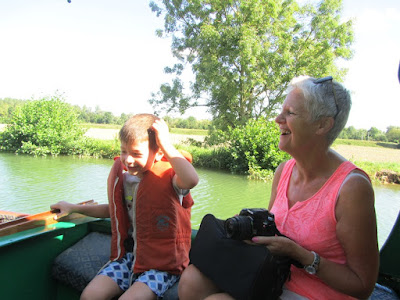 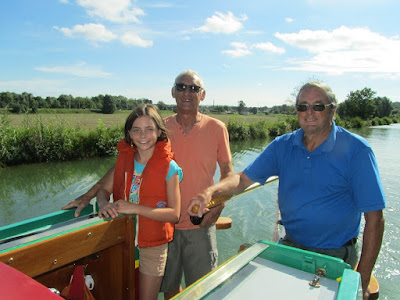 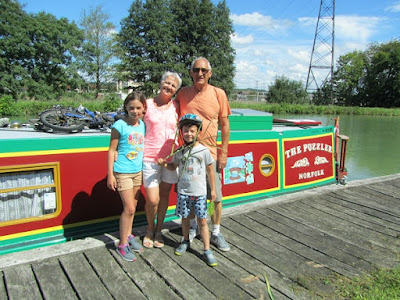 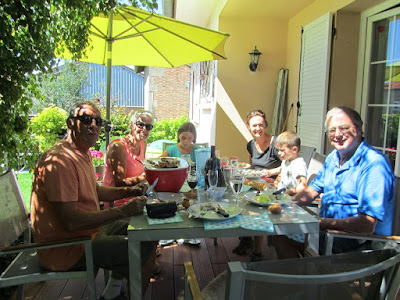 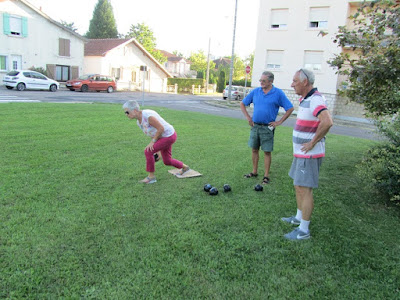 1st - 10th August 2017. On along the Canal de la Marne au Rhin (Ouest) via Void, the Mauvages tunnel and Demange-aux-Eaux to find lots of weed at Treveray. Moving on past Givrauval and Tronville to Bar-le-Duc. 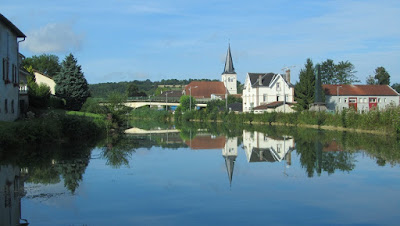 On the approach to the village of Void, the reflections are really good. Sorry about the delay with this posting, but we have had internet problems. 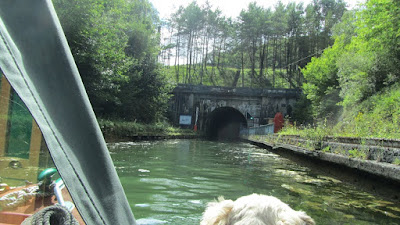 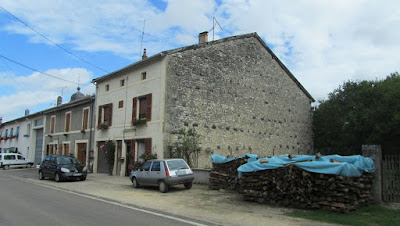 Many of the houses in the main street of Demange-aux-Eaux are similar to these, with a great depth back from the road. 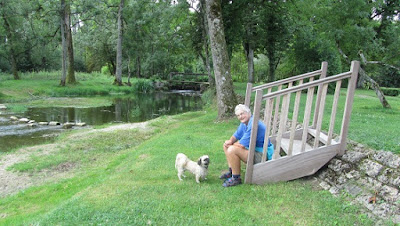 We were able to walk down to the river L'Ornain here, and Shannon had great fun in the water. 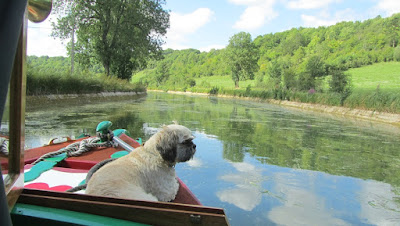 We had a slow afternoon on Friday, for several reasons. Our first lock on leaving Demange was on double red, with a boat in the lock. Double red means a phone call is required to VNF, requesting help, and Monsieur duly arrived after 40 minutes. No-one knew what had been wrong. Our next problem was at lock 5, as we had missed the sensor when leaving lock 4. As The Puzzler is not as wide as most boats in France it is essential that we leave each lock on the side of the sensor, so that the signal can be sent to prepare the next lock. This might be either side of the lock, and we must have been on the wrong side! Monsieur arrived 45 minutes later to activate lock 5 for us. 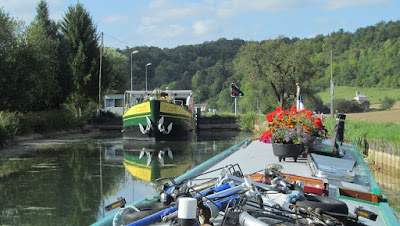 As we approached lock 10 we could see the hotelboat La Nouvelle Etoile, apparently stuck in the lock. He edged forward, very slowly, and took nearly an hour to get out of the lock and past us. By then it was after 6pm and the lock was officially shut for the night. However, I managed to persuade VNF to operate the lock for us, which was good, as there was no place to stop above this lock. 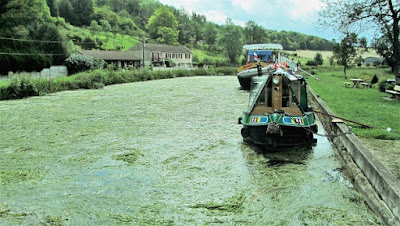 At Treveray there was a great deal of weed, which had been all chopped up by the hotel boat's propeller, being low down in the water. Last night, when we arrived, the water level was down by about a metre, and the only way off our boat was by climbing up the plank at a 45° angle. However, today we are walking down the plank to the boat, with the water level back to normal. 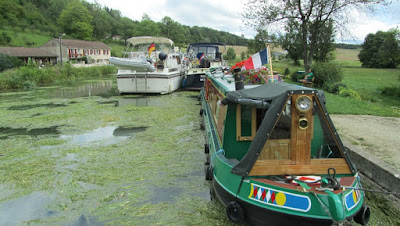 No more boats were allowed to continue up the canal for 24 hours, until the, by now very unpopular, hotelboat was well out of the way. Passengers on this boat have paid 8000 euros a week to crawl along at a rate of one lock each hour! There were six boats at Treveray on our second night there, with several nations represented. 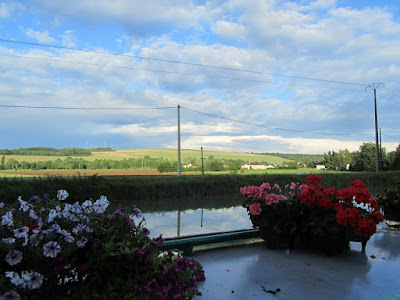 As we reach Givrauval, there is a terrific thunderstorm, right overhead. Later in the evening though, the weather improves, and the view over the wider valley can be seen, still in the sun. 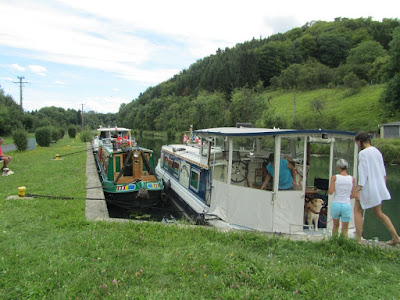 At Tronville, we were involved in some inventive mooring, to find room for this Dutch boat. A quarter of an hour later, the French boat in front of us moved off! Our new Dutch friends then moved in front of us, but it would have been thoughtful if the French boat had said that he was leaving soon. 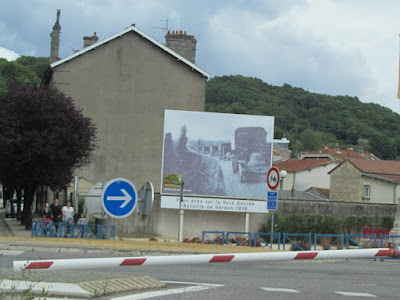 At Bar-le-Duc this placard shows the start of La Voie Sacrée which was of great importance during the battle of Verdun in 1916, being the only road out of range of enemy artillery. Day and night it was the scene of convoys of men and equipment which supplied the gigantic battle
Posted by Andy and Sally at 05:23 No comments: