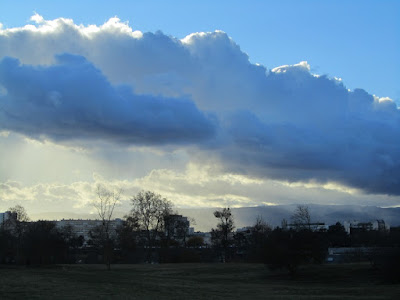 A French sky over the Loire. 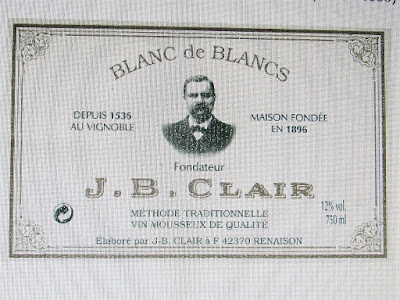 We had a port outing to JB Clair, a local producer of cremant, which is basically fizzy wine. If it were produced in the French region of Champagne, it would be called champagne! This has been a family business for over 100 years. 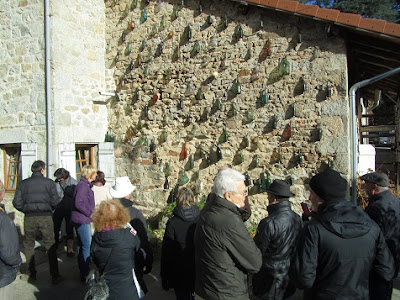 There are a great many very old wine bottles in this attractive display, mounted on the wall, just outside the cave. 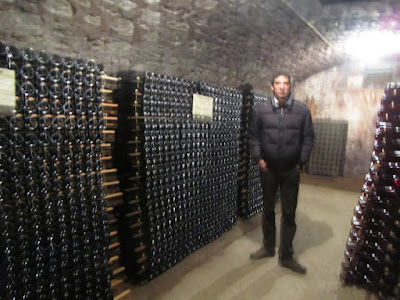 Inside the cave, apologies to Monsieur for the blurring! Here all the bottles are supported solely on thin laths, so it is a work of art to construct one of these stacks. Everything at this cave is done by hand. 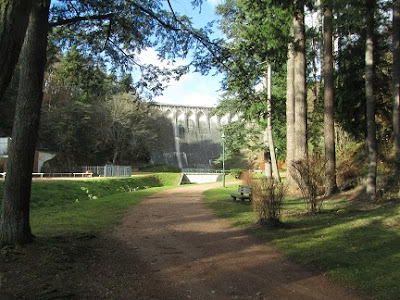 After leaving JB Clair, we made our way up to the Renaison dam. 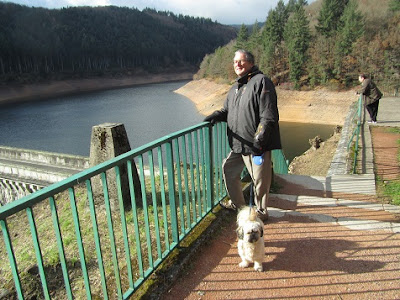 From the top of the dam it can be seen how low the water level is. This is the source of all of Roanne's water so should we be worried? 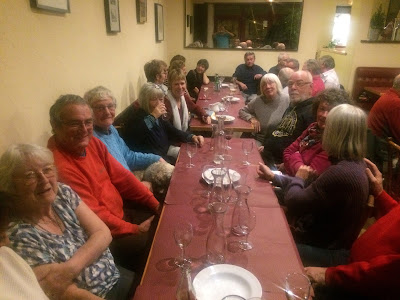 By the end of November, there are fewer resident boaters at L'Authentique, although the room is still full every Thursday for Happy Hour. This photo should have been taken earlier, before the wine bottles were empty, and the plates were still full of chips! 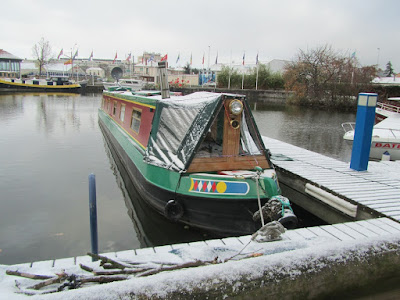 1st December brought our only snow of the winter so far, but it did not stay for long. 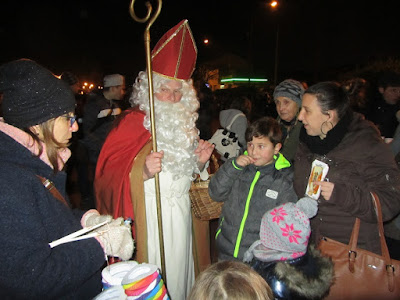 Saint Nicholas arrived on 6th December, but not by boat this year, as the police had decided that it might be too dangerous! 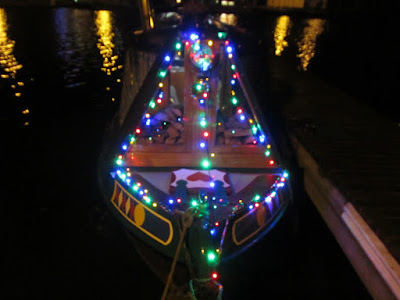 There is an annual competition for the best Christmas lights in the port. We are taking part this year, rather than competing! 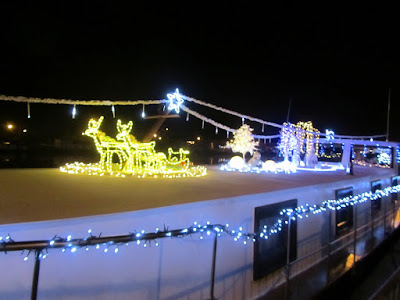 Duck Story won first prize this year again. They do have a wonderful display. 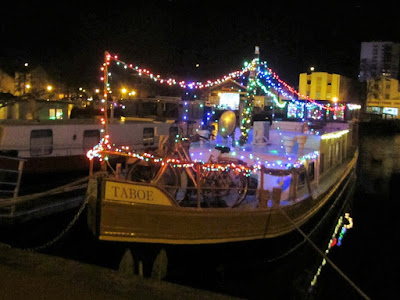 We think that Taboe should have been second! 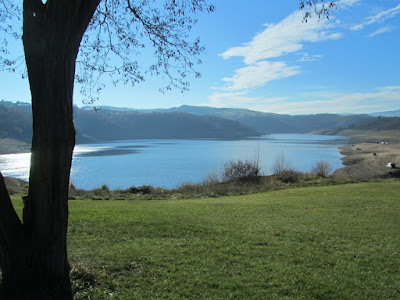 At Villerest the river Loire is held back by a massive dam to create this reservoir. 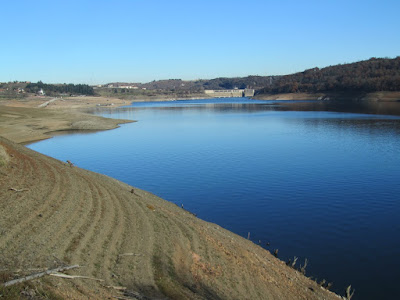 Here too the water level is very low. 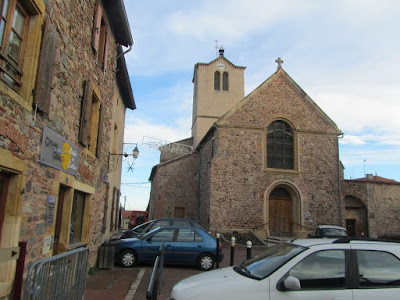 Having walked along the reservoir, we returned to the village of Villerest where part of the church dates back to the 13th century. 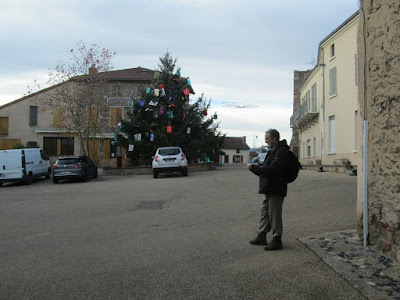 In the town square, Andy is checking out our route back to find the car. 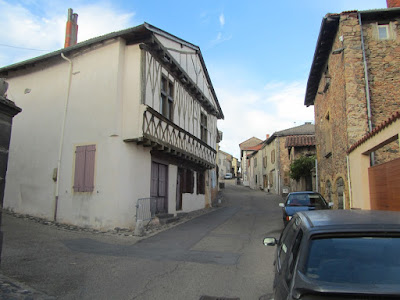 The streets here have real character. 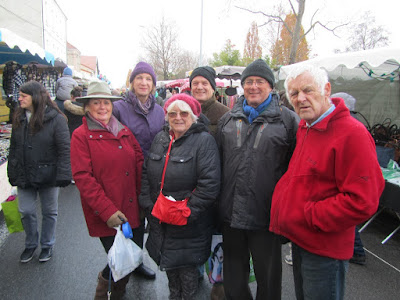 The Fair Froide was certainly cold this year. 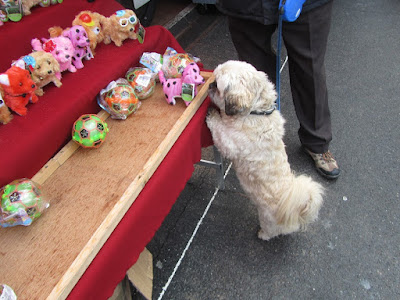 Shannon was fascinated by this squeaky dog. She nearly knocked the lightweight stall over, in her excitement! 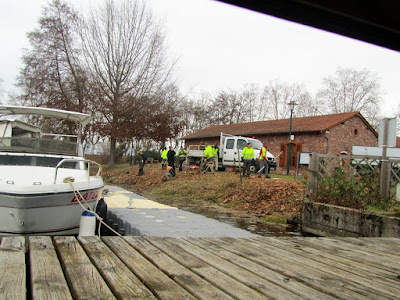 Monday brought a gang of eight VNF men, here to tidy up the port. 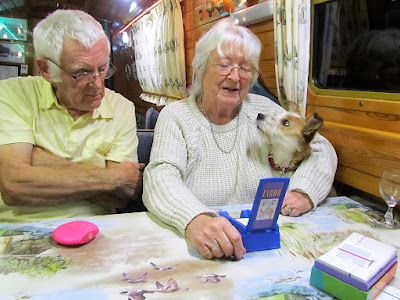 Daisy dog is concentrating hard, so that her team wins!
Posted by Andy and Sally at 11:17 No comments: