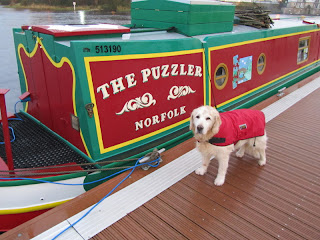 Here Catkin is celebrating her 14th birthday. Well, the rain is enough to depress even the jolliest dog! 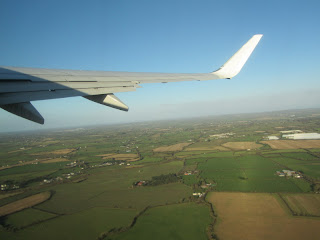 Sally flew off to Norfolk for a week, to catch up with everyone there. These green fields are in the Emerald Isle near to Dublin Airport. A following wind meant that the flight took 50, rather than 75, minutes to Stanstead. 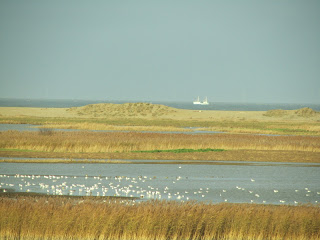 The coast at Cley was a wonderful place to walk, with
so many seabirds everywhere.
We were lucky enough to see a shorteared owl flying nearby, but I was too slow with the camera! 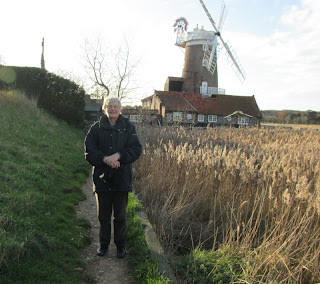 Cley Windmill is said to be the most photographed windmill in Norfolk, so we kept up the tradition. It is certainly very scenic here. 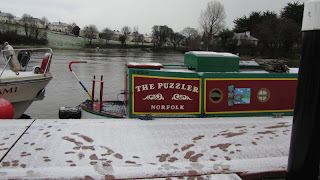 Back in Enniskillen, we had a light fall of snow, to brighten the jetty at the Round "O" mooring. 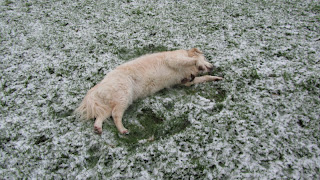 Catkin decided to make flying angels in the snow. 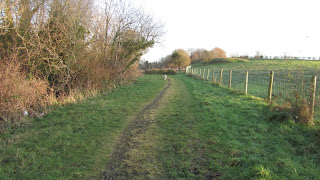 The snow did not last long, so we walked down the river to Portora Castle. It is a pleasant walk, but some of the crew do not like to hurry! 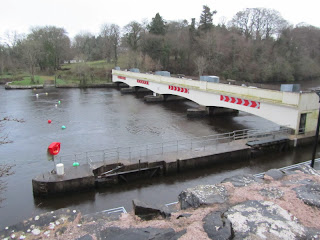 Looking down from Portora Castle over the River Erne, we can see Portora Lock in front of the bridge. There are sluices under the arches of Portora Bridge, which can be lowered/lifted to control the water level.
The bouys below the bridge mark the position of the eel nets here. Eel fishing is popular in Ireland. 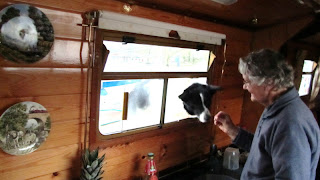 Everybody on the jetty is very friendly, and show an interest in what we are doing. 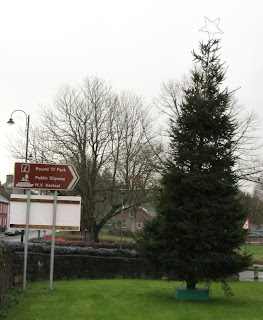 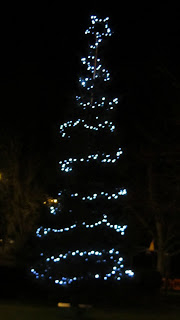 The Christmas tree at the road entrance to the Round "O" lights up as dusk comes, and looks wonderful. 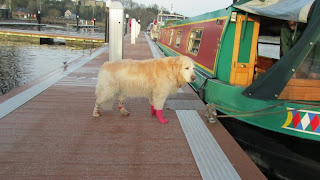 One morning the jetty was like ice, which it probably was! Catkin could not stand up until she had her socks on, which really worked well. Everyone was very jealous as she trotted along safely, while we slid our way to dry land.

Our Christmas decorations are now in place on The Puzzler. We have been to one Christmas Bridge party already this week, and have another one tomorrow, so the festive season is well under way here in Enniskillen.

Happy Christmas to Everyone!
Posted by Andy and Sally at 12:13 1 comment:

We are still here on The Puzzler at the Round O in Enniskillen, safely settled in for the winter. As we are on the outside of the outer jetty we have a good view across the River Erne. There has been a lot of rain recently, with very few dry days, and the river is flowing quite fast. However we are out of the main stream of the river here, but can watch the rowing crews every weekend as they pass us by. There is very little other boat movement now. 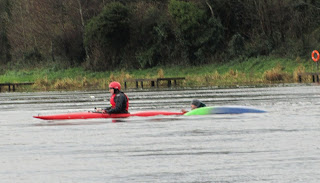 Today we saw two kayaks with a man overboard but he did not seem too upset about it! No panic here! They made their way back to the slipway quite easily, but he must have been extremely cold. 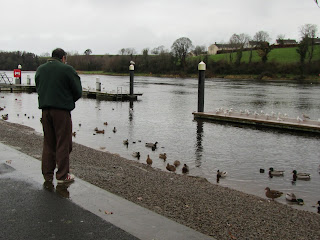 On walking along there do not seem to be very many ducks. However it all changes when the bread comes out! 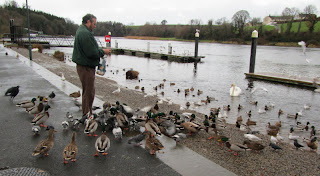 They all appear very quickly, as do the pigeons, gulls and a few swans! 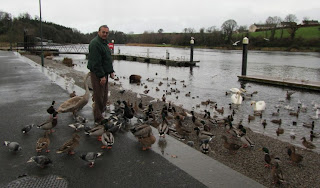 This large cygnet crept up behind Andy and bit his hand. 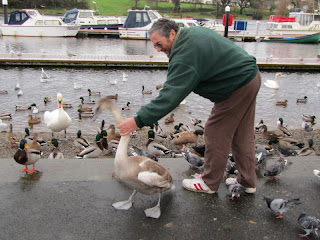 I think it realised that it had not been a good idea! The adult swan soon arrived to save it! 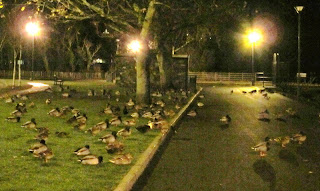 At night the sleeping ducks can be a hazard to any late night traffic on the road past the jetty. 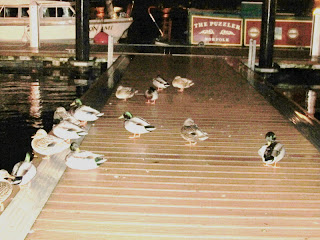 Even walking along the jetty can be hazardous too, although Catkin can clear them pretty quickly!


We are enjoying our stay in Enniskillen very much. It is a lovely town, with a lot going on. Everyone we meet is extremely friendly and we have been made to feel very welcome. We have joined St Michael's Bridge Club in Enniskillen, and also Devenish Bridge Club, which meets at Irvinestown, twelve miles north of here. Friends in Enniskillen give us a lift to this, so we have been lucky. The standard at both clubs is very high, which is good for our game!
We play bowls twice a week too, at different clubs in Enniskillen. It is short mat bowling, which is very strong in Northern Ireland in the winter months.
Posted by Andy and Sally at 09:47 No comments:

Update on Maps of Ireland. April to November 2011 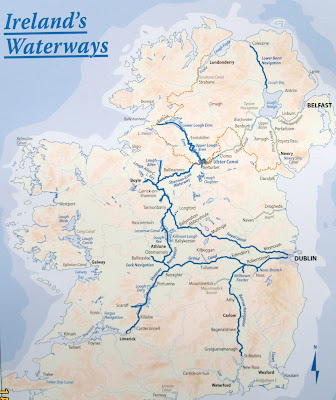 This is another update of our route through Ireland.
We started our journey in April near to Athlone, which is straight across Ireland from Dublin, on the River Shannon. We cruised from Athlone across Lough Ree, on up the River Shannon and across the Shannon - Erne Waterway to Upper Lough Erne. We sailed on into Northern Ireland, through Enniskillen and on to the far end of Lower Lough Erne at Belleek. This was as far as we could go!
We then returned back past Enniskillen and through Upper Lough Erne again to Belturbet, which is back over the border in the Republic of Ireland. 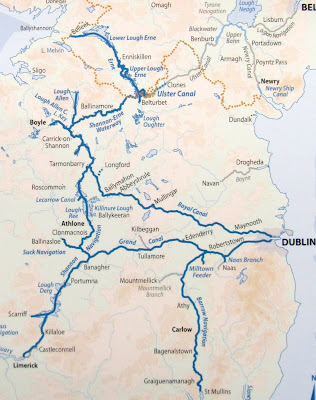 Next it was back along the Shannon - Erne Waterway. We sailed up Lough Key to Boyle, then back to the River Shannon. We followed the Shannon back to Lough Ree, and on to Lough Derg, the largest and most impressive of the loughs on the Shannon. We reached Killaloe late in August, and continued on to go through Ardnacrusha Lock.We considered Limerick a step too far.
Since August we have made our way back up the River Shannon, with a detour up the River Suck to Ballinasloe. Having reached Carrick on Shannon, it was then back across the Shannon - Erne Waterway to rejoin Upper Lough Erne, and continue on to Enniskillen for the winter.
Posted by Andy and Sally at 09:46 No comments: