1st - 13th November 2015. Location of Roanne in France and the old town. An outing to the medieval villages of Ambierle, Saint-Haon-le-Vieux and Saint-Haon-le-Châtel in the mountains. 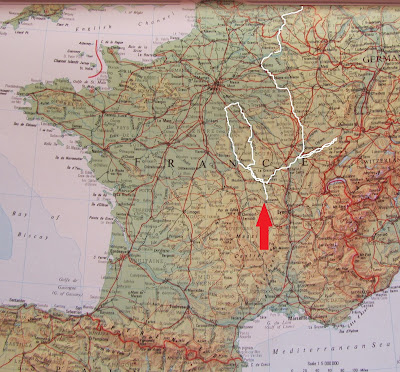 This map of France shows our route  from June until November, ending up in the town of Roanne , shown by the red arrow. 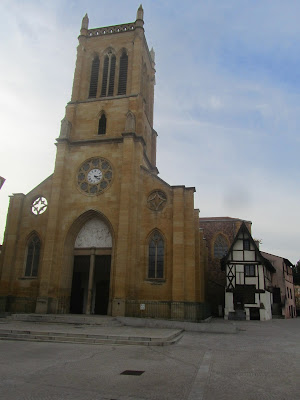 Roanne is a big town, where this church and little house can be seen in the old quarter. 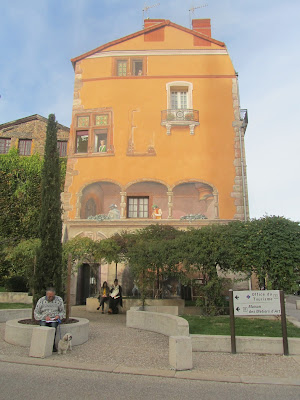 All the windows, the balcony and the people are painted on the front of this building. Andy and Shannon are deciding where to go next! 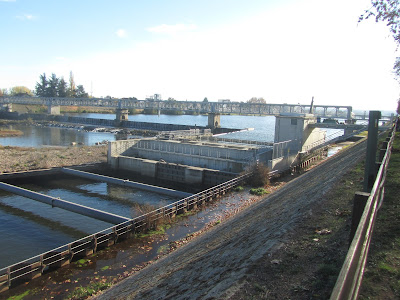 Back near to the harbour, the River Loire is used to generate electricity. 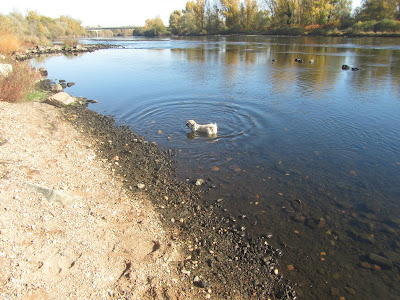 Today, a little further downstream, the river is quite calm, as there are no turbines running today. The walking along beside the river is excellent, and Shannon loves a swim. We have been having exceptionally warm weather for this time of year. 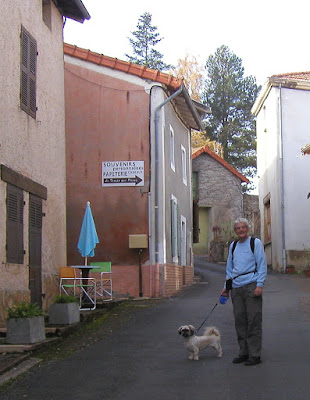 We caught a bus from Roanne to come here to Ambierle, a medieval village in the Monts-de-la-Madeleine mountains, which lie to the west of Roanne. 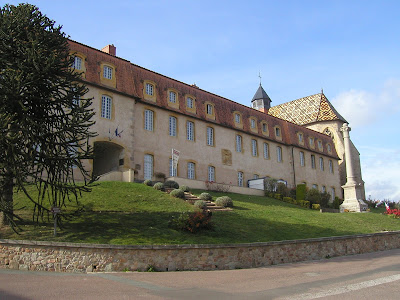 The priory church here has a wonderful coloured roof. 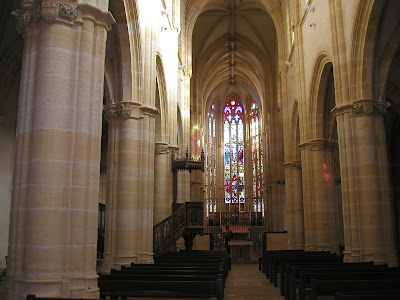 It is more like a small cathedral inside, and is very impressive. 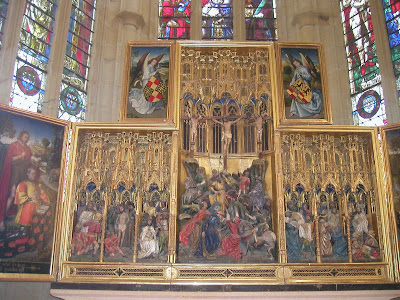 The carved triptych in the church is lovely, with so much detail in it. 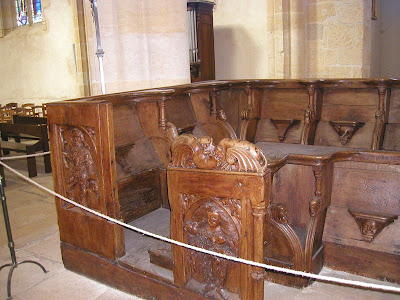 There is more carving around the choir stalls, where the tipped up seats have a ledge of wood protruding under each seat for extra comfort when standing up! 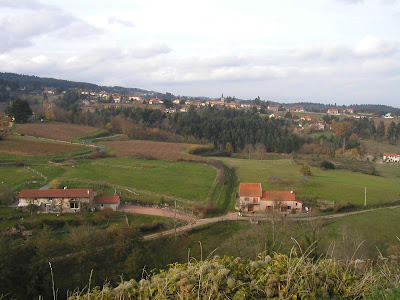 We travelled back by bus to the next village of Saint-Haon-le-Vieux, seen in the distance here. We then walked round the head of the valley, through the trees to Saint-Haon-le-Châtel. 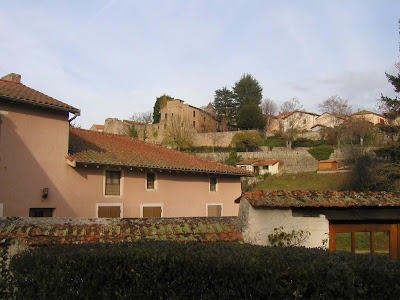 Saint-Haon-le-Châtel is a fortified medieval village, built on a rocky peak in these mountains. 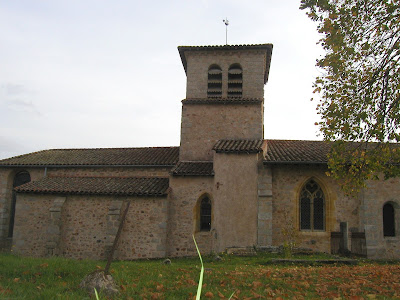 The church here was first built in the 12th century, although it has been added to over the centuries. 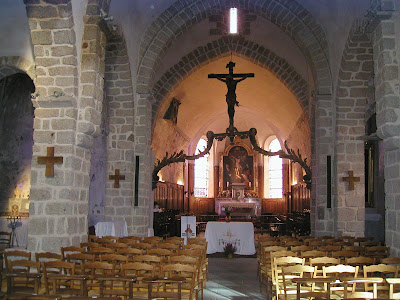 Inside too it is quite different to the priory church of Ambierle, being much plainer, but none the less holy. 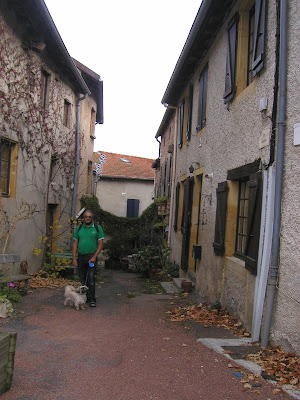 Some of the streets in Saint-Haon-le-Châtel are very narrow. 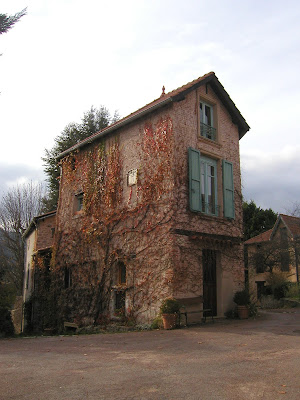 All the houses are different, particularly this one, which stood on its own, at a junction of several streets. 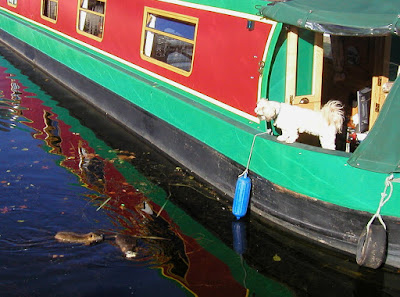 Back at The Puzzler, Shannon loves to watch the coypus, as they eat the apple we give them.
Posted by Andy and Sally at 09:12 1 comment:

27th Oct - 4th Nov 2015. We arrive in Roanne with the Puzzler, and settle into our winter mooring. 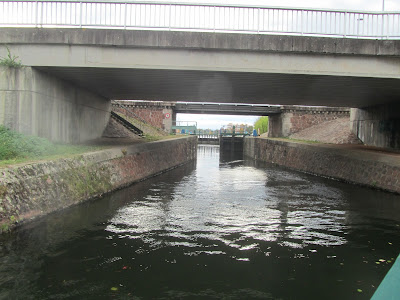 The lock ahead of us leads into the port of Roanne. It is good to be here at last. 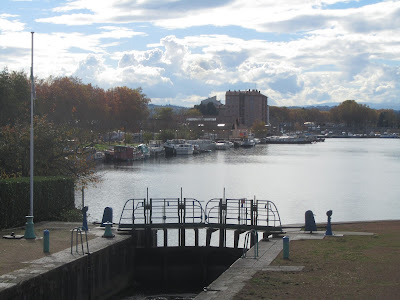 The port stretches out beyond the lock, and there must be over a hundred boats here. On leaving the lock we must turn left, to go to the Capitainerie (harbour office), and book in. We do not know at this point exactly where we will be in the port, but are expecting to be alongside another boat. 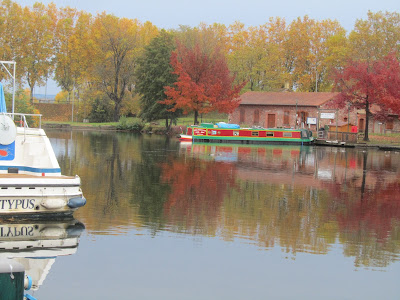 However, as it is now the end of the season, and no more visiting boats are expected, we have been allocated a permanent place on the jetty by the Capitainerie. 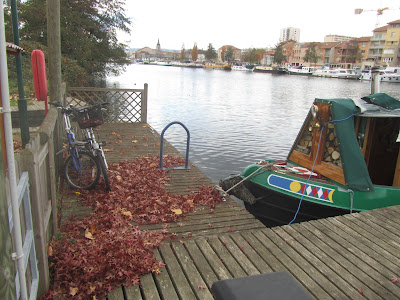 This is a very good place to be, as it has a small secure fenced area for Shannon, and for our bikes too. 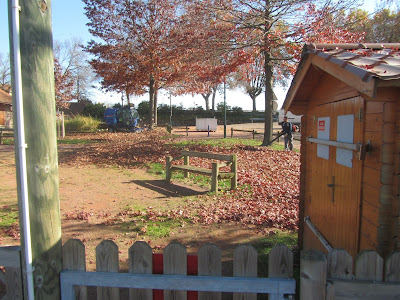 Within the week, the leaves are being collected from the park beside the moorings. From this gate by our jetty, we can look across to the bank which separates us from the River Loire. 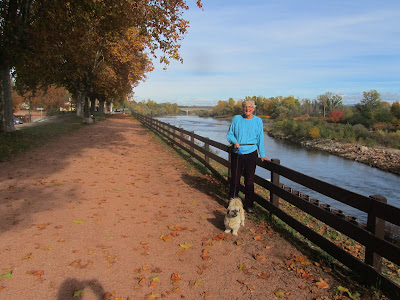 The Loire is quite an impressive river, even though we are a long way from the sea. 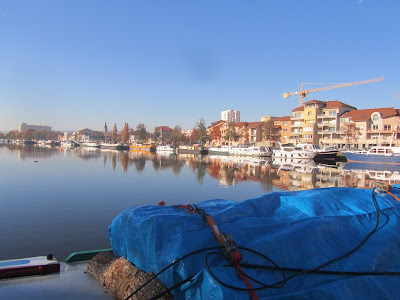 Back by The Puzzler, this is our view of the west side of the port by day. We are having fantastic weather this week. 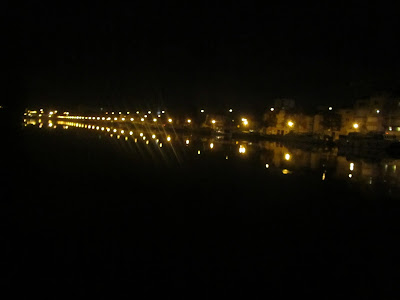 And the view by night! 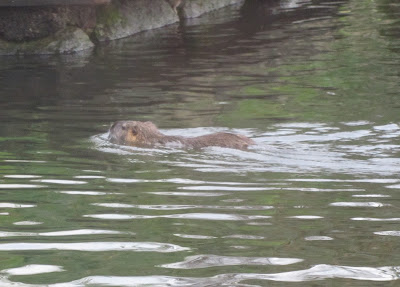 This coypu swims right past the boat. There are three of them living at this end of the port. 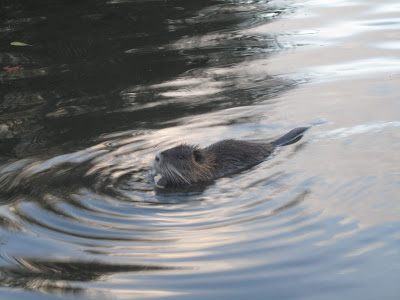 The young one is eating a piece of apple, his favourite snack. 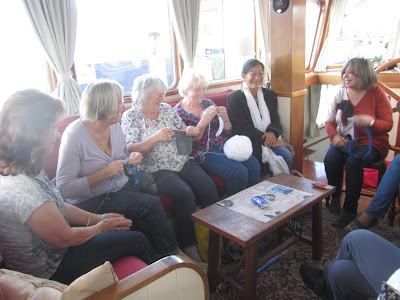 Everyone is very friendly in the harbour, with the ladies meeting for “Stitch and Bitch” every Wednesday. 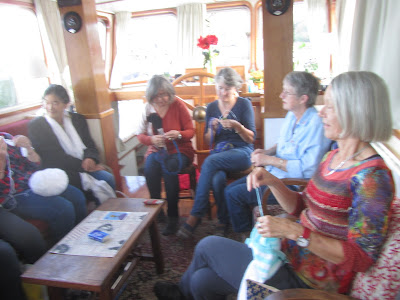 This week we are on the barge Aurora. So far there has been more talking than stitching, as some people leave soon, to go home for the winter. One lady is leaving for Australia, after many years on their boat in France, but is not coming back, which is a cause of great sadness. People here come from all over the world, including Australia, New Zealand, Sweden, The Netherlands, USA, with many from the UK. There was a Harbour Dinner this week, to greet new members to this boating community, and we also have Happy Hour at L'Authentique every Thursday evening. What a contrast to last winter in Schagen, where there were only three liveaboard boats in the harbour.
Posted by Andy and Sally at 04:15 No comments: