We returned to The Ardhowen Theatre to see The Winslow Boy. It was an excellent performance by the local amateur dramatic group. 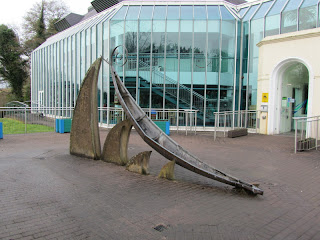 Outside the theatre this interesting sculpture of a boat can be seen. 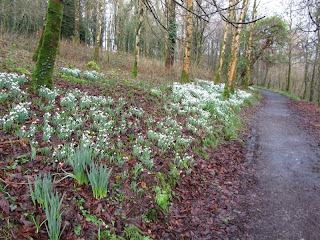 In the grounds of Castle Coole, snowdrops are looking wonderful. Spring is certainly getting nearer. 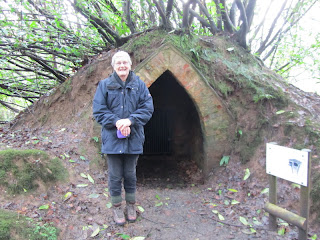 Further on in the woods here we found the old Ice House. In winter these buildings were filled with ice, brought up from the river below, to act as a cool food store for the big house. 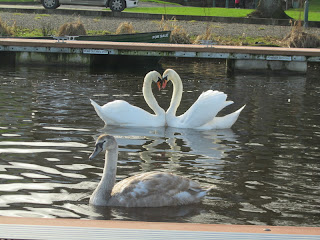 At the Round "O" it seems that love is in the air! 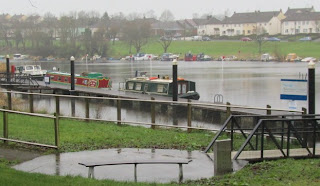 All boats are on the move every 48 hours. As one boater called across to us, "It's like a game of Chess, or Tiddlywinks, more like!"
The river bank, seen opposite Riverview mooring, is not currently under the jurisdiction of Waterways Ireland, but is a risky place to be if the water level rises. 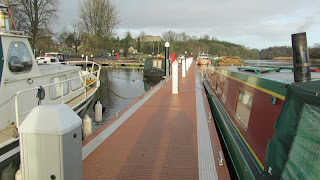 Back at the Round "O" with The Puzzler, we find that all the usual suspects are here too! 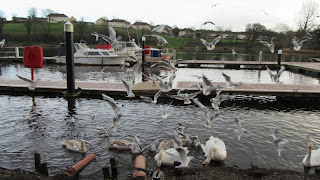 There now seem to be more seagulls than ducks, in the fight for any bread available. 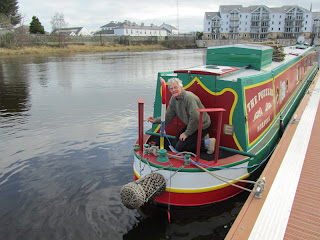 A sunny day allowed Sally to get the first coat of gloss paint on the new taff rail. If you remember, the old one was taken out by a speedy hire boat last year, and was replaced in the autumn. 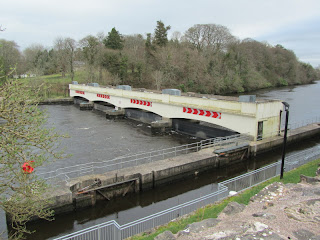 At Portora Bridge, the sluices under the arches are closed, and the lock is in use. This keeps the water level up in Enniskillen.
Posted by Andy and Sally at 05:58 1 comment:

This has been a very sad week for us as, after 14 years with us, Catkin has died. She felt slightly unwell recently on a couple of occasions, but only for a day each time. On Wednesday she became gradually more unsteady on her legs, and by the evening she had to be carried to go outside. On Thursday she lay down all day, then passed away early on Friday morning. She never seemed to be in any pain, so it was a good way to go. If a human year is equal to seven years for a dog, then she died on her 99th birthday.
Everyone here in Enniskillen has been very sympathetic, as she had made many new friends during our time here
.

Looking back to Catkin's younger days, this was on The Puzzler in 2005. 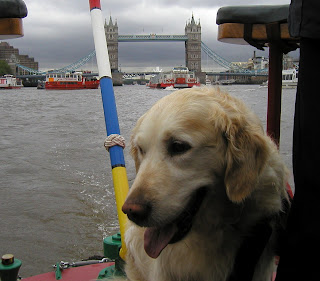 We made some significant journeys with Catkin, including this one through the Pool Of London in 2008. 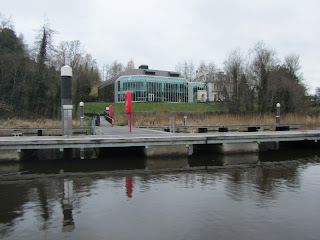 But back to Ireland. We had tickets for two shows this week, so travelled to the Ardhowen Theatre by boat. It is much more civilized than having to drive twenty miles to get there! 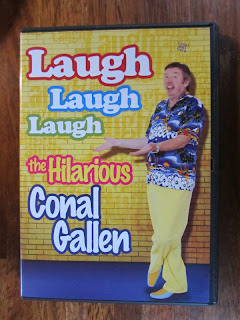 The first show featured Conal Gallen, a well known Irish comedian. He lived up to all expectations and was hilarious. If you are sitting in the front row, which (thankfully) we were not, then you will be integrated into the show, like it or not! 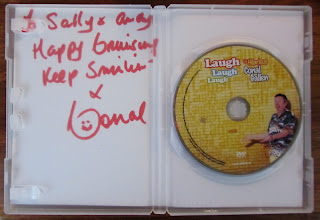 After the show he was in the foyer to sign his dvds and generally chat to his public. He was a thoroughly likeable person, and we were very impressed. 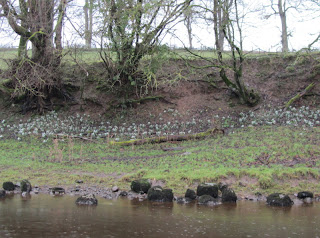 On Saturday morning we moved upstream and found snowdrops lining the riverbanks. 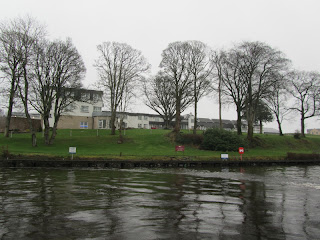 The next mooring upstream was at the Killyhevlin Hotel, so we spent a few hours there on Saturday, before returning to Ardhowen. We came to the Killyhevlin by road for our Enniskillen Bridge Club dinner before Christmas. It is a very smart hotel.

Back at the Ardhowen Theatre we went to see Brendan Shine, a well established Irish singer, who was also very good.
The plan had been to return to Enniskillen later on Sunday, but it rained nonstop all day, so we were cruising early on Monday. Bowls in the morning, followed by Bridge in the evening, kept us busy. 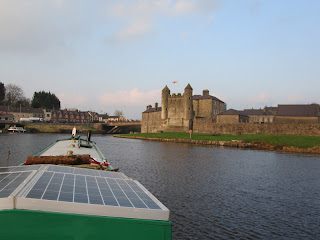 Enniskillen Castle is always an impressive sight, especially from the river. 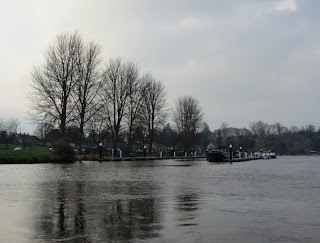 It is interesting to see which of our boating friends are at the Round "O", on our return. As Waterways Ireland are now implementing the current by-laws, everyone has to vacate any mooring for at least 4 hours, once they have been there for 48 hours. This seems unnecessary during the winter months, especially when enforced in an offensive manner, but, of course, the man is only doing his job. Esther Rantzen's Jobsworth Award comes to mind!

It is a lovely sunny day, for a change, and our gaggle of nine geese are sunbathing today at the Round "O". 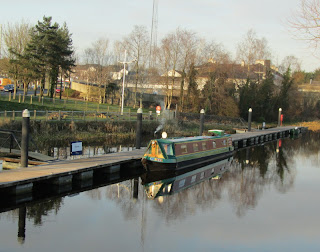 We also move round the corner, behind the Police Station, to Riverview mooring. This is near to both the library, and to the hospital and doctors' surgery, as well as being slightly nearer to the centre of Enniskillen, so is a useful mooring. 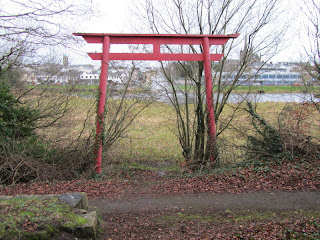 In the grounds of the hospital, overlooking the River Erne, a Mon (gate) can be found. Those of you have been to Japan will be familiar with this structure as it can be found outside most temples. A Mon gate is traditionally the transition between the mundane and the sacred, which cannot be closed. It would be interesting to know the history of this particular Mon. I asked the internet but it did not know.
Posted by Andy and Sally at 10:46 2 comments: