6th - 26th November. A quiet start to the winter in Roanne, and a week in England. 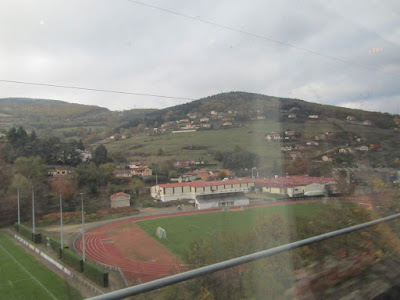 We went to England for a week on the 8th November, by train and air, taking one of the two flights a week from Lyons to Luton. With an evening flight there was not a lot to see on the way but here we are on the train, approaching Tarare, the biggest town before Lyons. 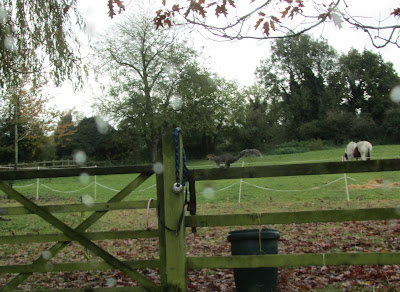 It was raining in Norfolk, but that did not deter this squirrrel, as he ran along the fence. He is just to the right of the gatepost. All is well here, after the flood in June. 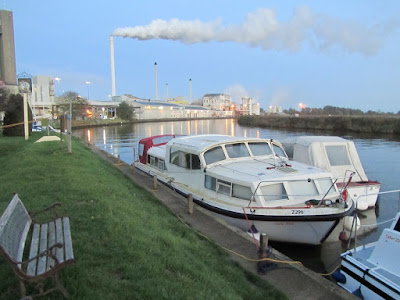 On the River Yare there were a few cruisers on the move, near to the sugar beet factory. 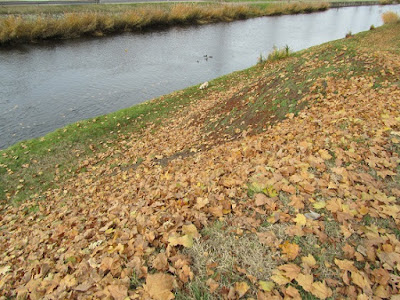 Back in Roanne, most of the leaves are down. Shannon loves to walk here, alongside the canal. She had a lovely holiday with her friend, Escot, while we were in England. 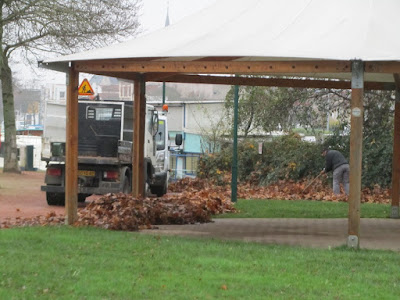 In the port, it is time for the final leaf collection. At one point, there were five men with blowers, organising the leaves, ready for the leaf lorry to arrive. 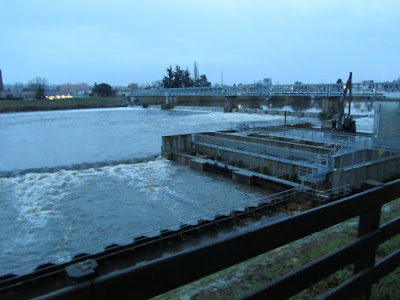 Meanwhile it has been raining! On Tuesday the River Loire was rising, after a great deal of rain. 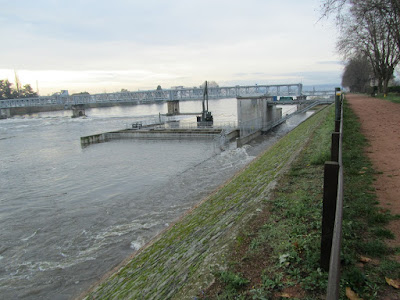 By Wednesday 23rd Nov the river was right around the HEP plant. We have never seen it as high before. 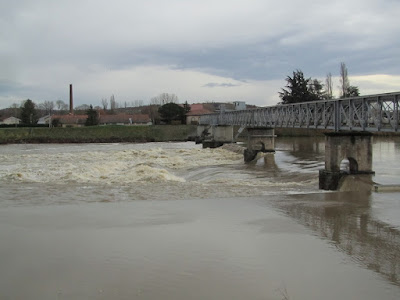 What power there is here, coming through the bridge!
Posted by Andy and Sally at 02:28 No comments:

26th October - 5th November 2016. Back in the port of Roanne, for bridge, stitch and bitch, happy hour and walks by the River Loire. 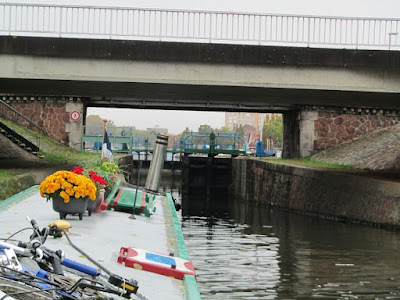 On into Roanne lock. 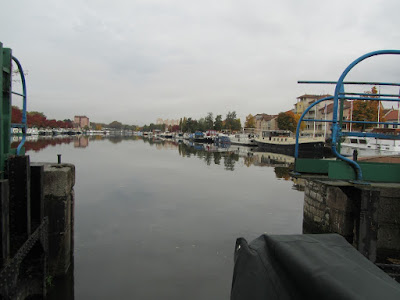 As we go on out into the port, we feel as though we have come home! 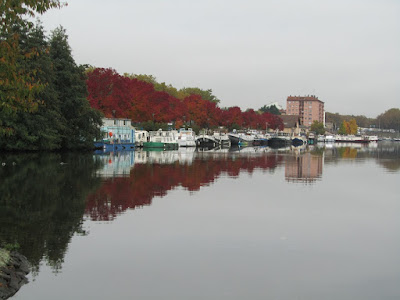 Looking to the left, the port looks as full as ever. 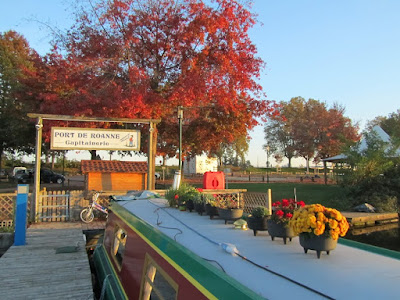 We have been given the same place as last year, on the port visitor mooring. It is very good for Shannon, as she has her own private fenced garden!
That same afternoon, we went to the Roanne Bridge Club, where it was nice to see all of our French friends again. 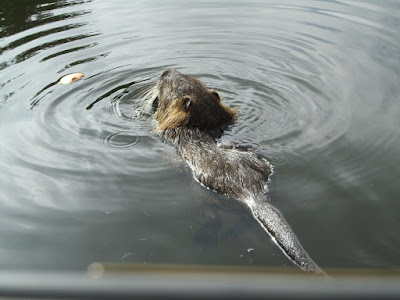 Cedric arrived by The Puzzler very soon for his piece of apple. 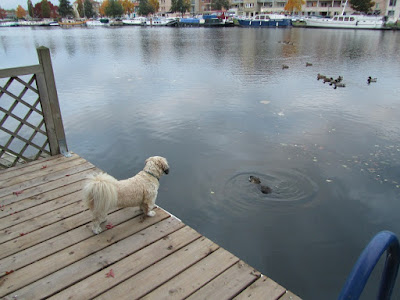 Shannon was delighted to see him again.
On Wednesday I went to Stitch and Bitch which, of course, is ladies only and again, it was good to catch up with everyone. We continued to do this at L'Authentique Happy Hour on Thursday. There are a lot of new people in the port, so we started to learn the new faces, and who is on which boat. 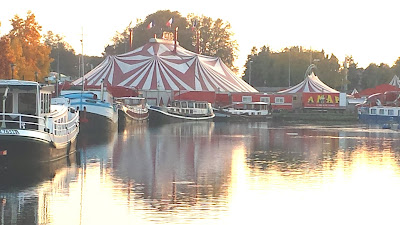 The circus arrived in town on Wednesday, and is on the car park at the far end of the port. 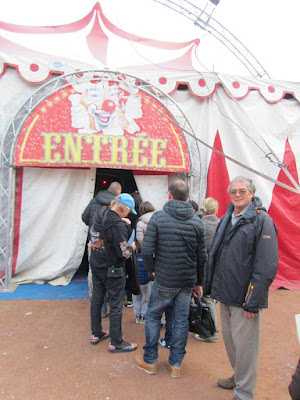 We went to the show on Friday, not having been to a circus with wild animals for many, many years. 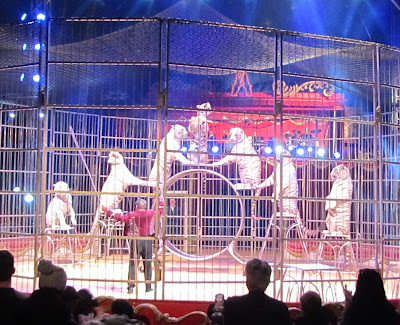 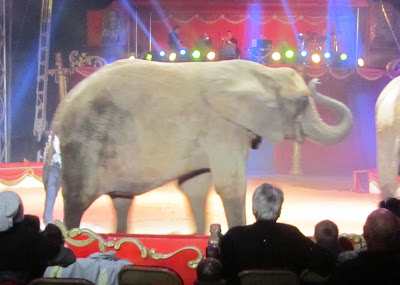 The animals were well cared for, and seemed to be quite happy. However, the magician was amazing! It is said that seeing is believing, but what we saw him do, with ladies in and out of his cabinet, was just not credible! 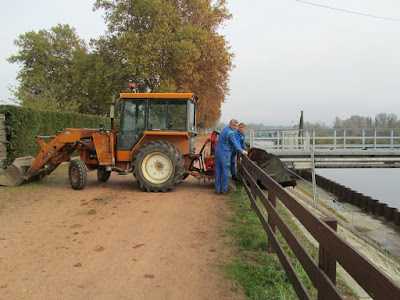 Meanwhile, by the river Loire, the VNF men have found a large slice of a tree trunk, and have managed to pull it out, before it reached the HEP area, which is just beyond this bridge. 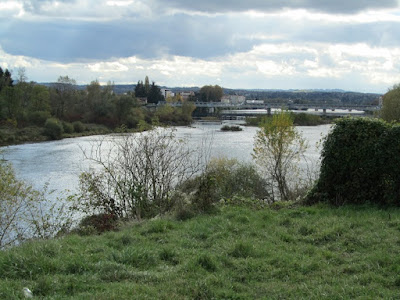 The River Loire looks as good as ever. 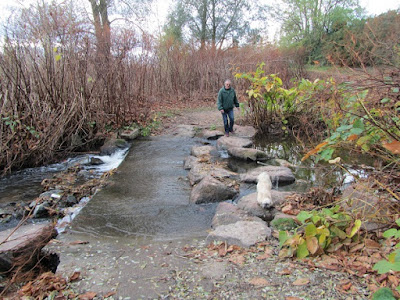 Further on, the stepping stones are clear of the stream today.
Posted by Andy and Sally at 09:42 No comments: