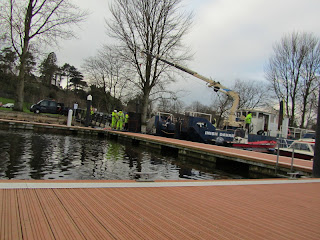 Waterways Ireland have arrived in force to cut four of the upright supports shorter. This is in preparation for the annual regatta here in the summer. The shorter posts will make it much easier for the rowing eights to be launched. 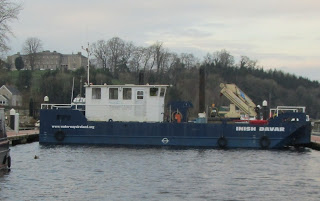 Their workboat, Inish Davar, is certainly man for the job. We had to move away while metal cutting was going on beside The Puzzler. 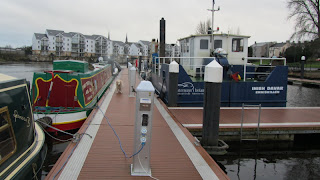 Inish Davar makes The Puzzler look quite small. Hopefully the river water level will never rise so high that the jetty can float off the posts at their new short height! 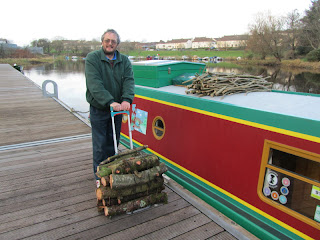 In Northern Ireland the waterway regulations state that after 48 hours at any offficial mooring, then boats must vacate it for a period of at least 4 hours. During the summer months, Waterways Ireland have had an ongoing problem in Enniskillen with boats overstaying, particularly at The Round "O". They have decide to enforce the regulations strictly, starting this week. It seems to be irrelevant to them that this is not yet the cruising season!
Because of this enforcement of regulations, we are on the move again. Our first trip was just round the corner to Riverview. We went to the Library, went bowling, and collected some wood for the fire. It is amazing how quickly four hours can pass! We then returned to The Round "O". 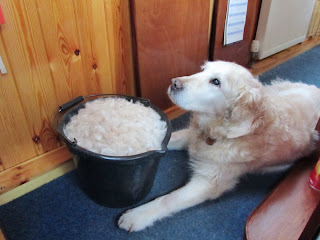 I have been collecting Catkin's fur to make a cushion. Luckily she enjoys being groomed. 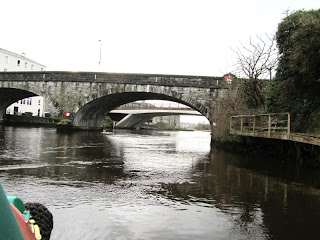 Our next outing was up through Enniskillen Bridge to go shopping. There is less water in the river now, but it still needed some power to get through the bridge. 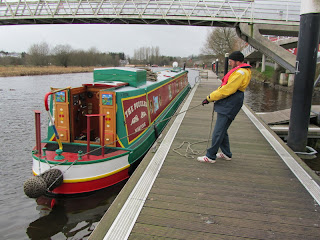 There are very few boats on the move yet. This is Broadmeadow mooring, near to the Forum Sports Centre. 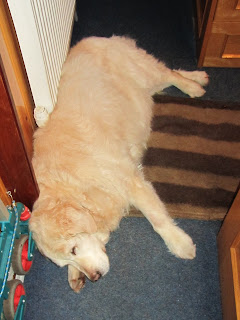 Catkin has been using her paw as a pillow. 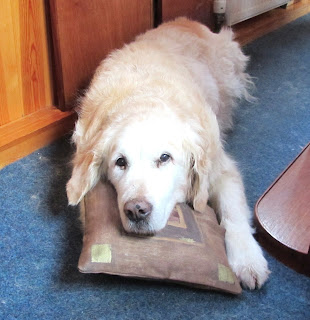 However she approves of the new cushion, made from her fur!
Posted by Andy and Sally at 05:31 1 comment: 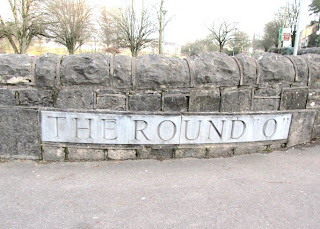 We are still happily moored at the Round "O". Someone from England asked us whether there are different shaped O's in Ireland! 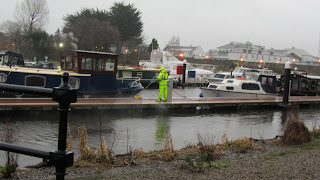 Soon after Christmas a man from Waterways Ireland arrived to steam-clean the jetty. He made a good job, and it was really clean, until night fell. Then all the ducks arrived to sleep, etc, on the jetty, as they do each night! 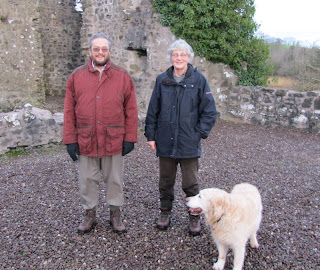 Our good friends, Maurice and Janet, from the barge Lasalle, came to see the New Year in with us, and they stayed overnight on The Puzzler. A good time was had by all!
Next morning we walked up through the woods to Portora Castle. 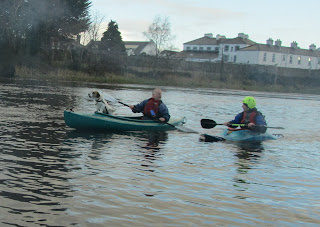 Early in January there was canoe activity on the river. This is better for a dog than putting your head out of the car window! 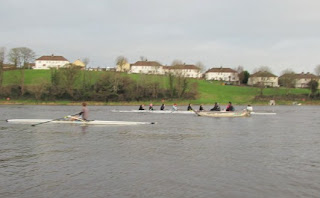 The single sculler is careful to avoid the rowing eight with its support dinghy. 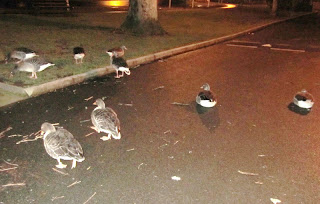 There are now nine resident geese, although before Christmas there used to be eleven of them. They do not socialise with either the ducks or the swans, and are very much a separate unit.
Sometimes they come to clear the algae off the sides of The Puzzler, usually at about 3am. Having found us, they then shout to each other, to make sure no-one misses this treat! 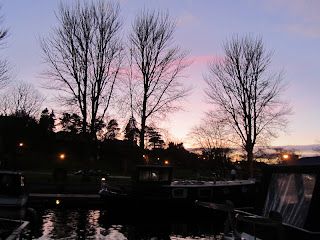 Although it rains on most days, we have had some sunny weather too, with lovely sunsets over the mooring. 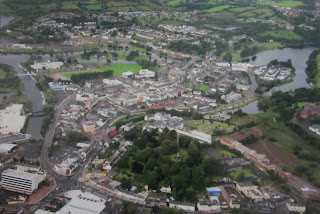 This aerial view of Enniskillen, on its island, was taken a couple of years ago. The main river can be seen, running from left to right across the top third of the picture. A loop flows down the left side to come round the island, rejoining the main river at the top right, having passed the Police Station. The Round "O" mooring is now more extensive than it was then, lying above and to the left of the Police Station, on the left bank of the river, just above the town bridge. 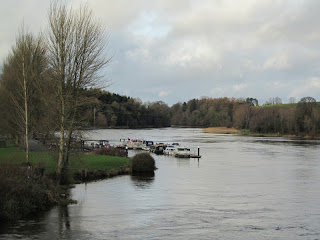 This view of the Round "O" mooring was taken from the town bridge. There is still quite a flow on the river at times. All the water in the River Erne flows on through Lower Lough Erne to the dam at Ballyshannon. When a lot of water is drawn off there for electricity, then it increases the flow on the River Erne here at Enniskillen. 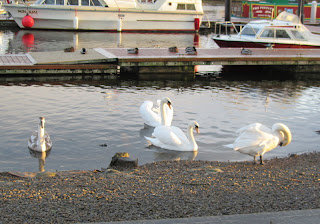 The swans are usually very calm, although one male has recently been chasing intruding swans, and being quite agressive towards them. 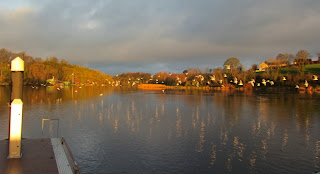 Flocks of seagulls come to spend time at the Round "O"
too, especially at the weekends. So many people come to feed the ducks, that there is plenty for all. 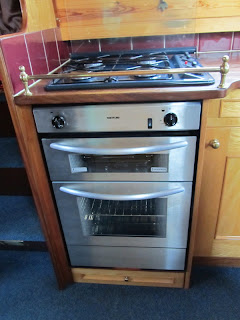 On 20th November Andy left our oven door open and Sally walked into it, while walking through the boat in the dark. It shattered into a thousand pieces, as a windscreen would. It was amazing how far the pieces went! We tried for weeks, unsuccessfully, to obtain a replacement door for the cooker, which was fitted in 2004, and is now an obsolete model. Eventually we had to buy a new cooker, which arrived this week. It fits the space available and is working well.
There are two morals to this story. One - Remember to close the oven door after cooking. Two - Put the light on when walking through the boat in the dark, just in case anyone left the oven door open! 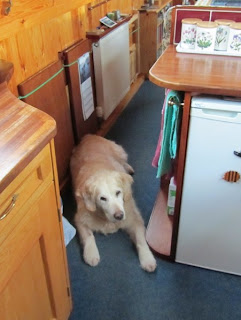 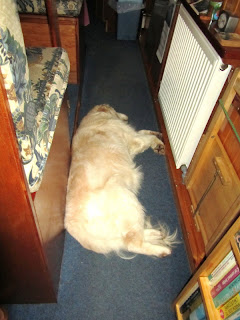 On talking about obstacles when walking through the boat! Catkin always likes to keep an eye on the kitchen, just in case any food happens to come her way. At other times the passageway past the dining table is very comfortable, so always look where you are walking!

We had a Bridge party for eight of us in the boat on Friday, which was great fun.
Posted by Andy and Sally at 09:43 1 comment: